I first had dealings with Dan Murari through my position on the Board and then CEO of South Canterbury Cricket after he arrived in NZ looking for a new life primaruly based around his cricketing skills. He eventually played for SC and Mid Canterbury at Hawke Cup level (the highest available locally) and would go on to work as a fulltime coach for Mid Canterbury.

My early involvement, other than with cricket, was helping Dan with his written English and to undersand kiwi grammatical English as well as our local slang and sayings. Dan had authored a book in India about a politician and he wrote articles for the Ashburton Gazette as well as other publications and I often helped by reviewing his copy.

Eventually Dan settled in Timaru working at Harvey Norman gaining more ‘NZ’ qualifications to support his Indian ones. He also went back to India to marry and brought his wife back to NZ and now is the proud Dad of a 6 month old baby.

During these years he has been building his contacts and assimilating into the kiwi way of life and his latest venture was to set up the 3C Computer Services company – the 3C brand stands for “Customer 1st Computer Company” so you can see how he promotes his business.

He has a shop in the Arcade in Timaru and another in Oamaru, but as still a small business needed a website to make some of his tasks more automated, saving on travel and time to hopefully make some of his work more auomated, and allow him to promote it more consistently.

So, Dan contacted Medlicott Design to get a new website with an online shop that he could update/maintain himself and this is the result. 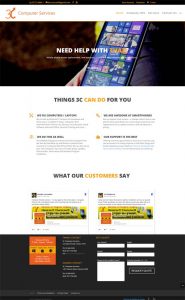 Dan contacted Medlicott Design to get a new website with an online shop that he could update/maintain himself and this is the result.